We completed the 48 Hour Film Project – on time. 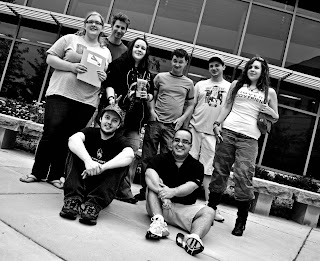 Now I’ve been obsessing over little details I wish we had caught. It’s so easy to let yourself get caught up in your mistakes. Overall, we put together a pretty solid little film for what we had at our disposal within the constraints of the competition. I kept it together pretty well this weekend and now that I’m sitting still, I can feel that my brain is a little tired. Here’s a recap of the weekend as best I can remember it.

On Friday night, we met up at Starbucks and headed to the Kickoff. We were told to get there BY 6 PM which was lame since we didn’t need to actually be there until 6:45 PM. So we waited and waited until the genre draw at 6:45. When our time came, Aaron stepped up and drew “fantasy” for us. We were so happy that we didn’t grab film de femme because none of us can write strong female characters and we were seriously considering going for a wild card. 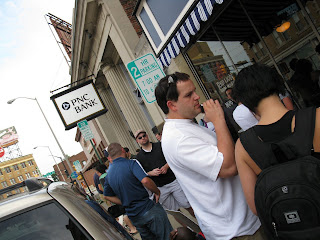 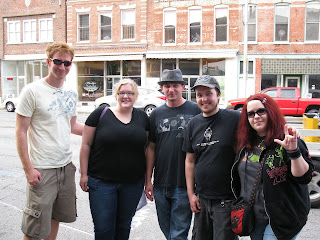 We rushed back to Starbucks where we camped out outside for the rest of the evening. As soon as we sat down I presented an idea I had and we went with it, scripting and creating a shot list until about midnight.

We met back at IUPUI at 8 am, followed shortly after by our crew. Except for our main character actor. We went to work setting up, getting everyone ready, trying to reach him, but every call went to voicemail and Facebook was quiet. We were more than a little worried at this point, because 10 AM was our targeted time to start shooting. Luckily, Josh managed to dig up a friend of his that was willing to come help us and he ended up being perfect – even more perfect than our original actor that flaked. 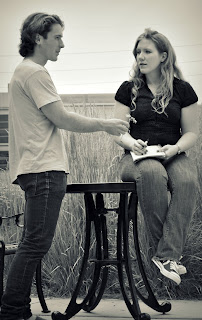 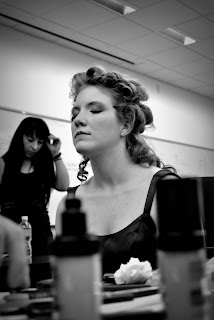 Our filming started off slow and sped up throughout the day. Most productions end up like that, which drives me insane. My favorite shot was a long tracking shot with the main character walking through a crowd of people. I got to direct this part and coordinate 10 different actors/extras at the same time, which was fun 😀 I was so thrilled by all the people that turned out to help us. Josh managed to convince 3 hair/makeup people to come and they were fantastic. A couple of my friends from high school showed up, one to be an extra, and one to be our fabulous still photographer for the morning part of the shoot. She did such an great job. The black and white stills in this blog entry were shot by her. You can see her work at mecampbellphotography.blogspot.com. 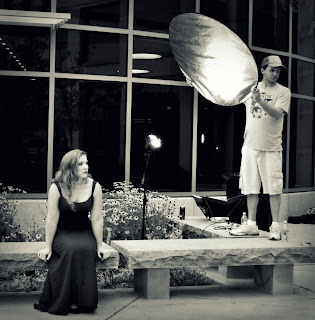 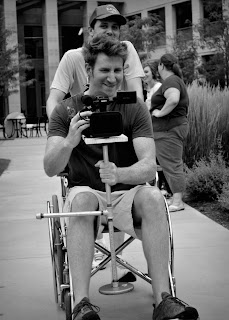 My mom and her friend brought us lunch around noon – fruit, chips, and subway platters, which was exactly what we needed. Nobody ever got moody from lack of food while we were shooting, which is a big achievement. We continued to shoot until about 8PM. Katie and I set up to edit at around 2 and realized that we didn’t have the appropriate capture cable. The new MacBook Pros don’t have firewire 400 anymore. T____T A few phone calls later, we were on the road allll the way up to Fry’s Electronics to purchase a firewire 800 to iLink cable. Luckily it didn’t really hurt us at all in post production. It just added a few grey hairs to our heads. 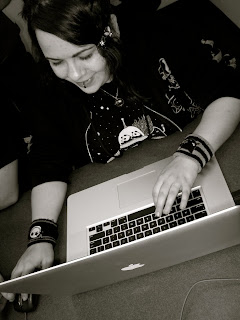 There was a brief period where we thought we didn’t have enough footage, which I now have an ulcer from, but we then realized were fine and moved forward, completing the rough cut just before midnight. My husband brought us pizza and wings to keep us going, which was also effing amazing. We basically finished the fine cut by 2 AM before getting kicked off campus by security. 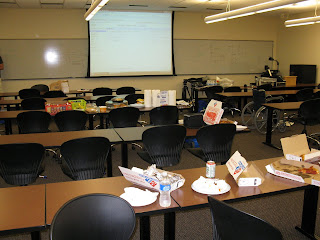 We met again the next morning at noon and got to work on the music since that’s the earliest we could meet up with the sound mixer/recordist who was absolutely amazing. He was with us for the entirety of our shoot, and I think he just might win VIP for our group. While the sound was mixed, Katie and I color balanced and graded the edit with Magic Bullet Looks, and rendered the timeline in full.

Once the sound and music was complete, we took the exported sound file and slapped it on my rendered timeline. We had some aspect ratio troubles on Saturday I soon found out, so we ended up with a 720×480 letterboxed file. Whatever, it was done at 6:45 PM. We left and drove to the drop off, and breathed a sigh of relief in completion of our work. There are minor fixes I’m going to make to the master copy of our work (like putting it back into 720p), but really the story is pretty strong and succinct, the color looks good, and it was turned in at 7:14 PM which means it was on time.

In the future, I will strongly advocate having multiple eyes looking at every step of the way. While you all trust each other, at the same time you have to consider the extreme circumstances. It’s so much easier if multiple people are putting their collective observation skills in play when no one is operating on all cylinders.

Overall, it was a really good experience for us. I am really happy to have a core group of talented peers that are passionate about the same things I am. We had a lot of fun together, and if we don’t win any awards, it’s ok with me. Of course it’d be really nice to win something, but the experience, the memories, the photos, and then the screening will have been worth all the stress of putting the film together.

That being said, I’m really glad the next 48 Hour Film Project isn’t for a year. HA.

If you’re interested in coming to the screening on August 7th, our film will be in Group B at 7PM at the Indianapolis Museum of Art Toby Theatre. Tickets are $10 and can be purchased online. We would really appreciate all the support of people coming to our screening (and voting for us for the audience award!), and seeing Pants Cannon Media’s big-screen debut. 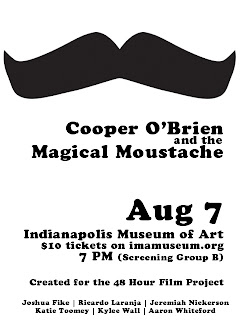 I’ll be updating again after the screening with a copy of the finished film embedded and some more production stills. I re-exported in the correct aspect ratio with higher quality and asked if we could swap it out, but alas we cannot. At least we have a high resolution 720p file for ourselves, and to submit in other festivals.