From the moment I stepped in the door at BCM, that’s all I heard from Walter. It was like a nerdier version of Obi Wan Kenobi. (Is that possible?) My work station is equipped with a Wacom Intuos 4 (I think) — which is very nice, both the product and the fact it was sitting there.

(And note to Walter: it was LIKE Obi Wan, I didn’t say you actually ARE Obi Wan.)

But man, talk about tablet-challenged. The first time I picked up a pen and tried to do anything, I was dragging crap all over and misclicking and things were catching on fire. NO. WHY. STOP. Adjusting to a new job and state and like I don’t know LIFE IN GENERAL is hard enough without taking away my mouse, my most basic human comfort. I bailed.

Seriously, what’s so fab about it? 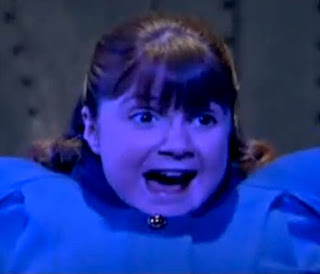 Two months later, this week, I decided to give it a fair shot. I asked for advice on Twitter for getting a handle on…handling it. The most useful tip came from Shane Ross.

Turns out there are a lot of you tablet editors lurking out there. Who knew asking about editing on a Wacom would bring all you geeks out of hiding?

So this past Monday morning at 9:30AM, I loaded up my project in Premiere Pro CC, put my mouse aside, and committed to pen only existence for a whole week.

At about 9:45AM, I had irreversibly screwed up my workspace in Premiere. I have no idea what I did — probably dragged something somewhere somehow — but my stuff went all bananas and I spent 15 minutes getting it back the way I wanted it.

By afternoon, I was getting the hang of it. Sorta. It wasn’t frustrating me to the point of throwing it, but I was swearing quite a bit as I acclimated to its sensitivity. It ended up feeling more natural more quickly than I had anticipated, to be honest. I use the keyboard very heavily for everything and when my right hand isn’t doing anything, it sits on my mouse. Hangs out there, chillin. With the pen, I avoid having it sitting in an awkward position for an extended period. I also don’t have to put down the pen to do what my right hand does. I would show you my Premiere keyboard, but the keyboard shortcuts are seemingly impossible to share. It’s very Avid-y with a strong dose of FCP7.

A thing I struggled with occasionally was dragging sliders in the effects window, or dragging graphics in the timeline. I grab and move around lower thirds and stuff all the time in my sequence, and just use snap to get them where I need them. When I “let go” of a graphic or something, the pen is so sensitive that it doesn’t land where I want it to go, but a few frames to the left or right. So that’s incredibly irritating. But at the same time, snapping stuff with a mouse in Premiere is also frustrating. I don’t think it would be an issue so much in Media Composer, at least not with the stuff I usually cut in there. Plus, selecting trim points is different, so a lot of those issues wouldn’t be relevant.

I expected this to be a fairly colorful blog post with a lot of censored swear words and hilarity about accidentally deleting entire volumes of work, but unfortunately for you (and fortunately for me) this was not the case. By Wednesday I wasn’t having much of a problem. My brain was starting to deal with the oddities of the tablet and pen and compensate for them. I even did some cutting with a producer alongside without swearing at the pen AT ALL. Or doing anything stupid.

I know, huge accomplishment. For me, anyway.

A stupid thing I keep doing is putting the pen down and losing it. It’s black, the desk is black, and it’s dark. GREAT. Another stupid thing I keep doing is reaching for the mouse. That’s some difficult muscle memory to break. I’m reaching for a mouse with a pen in my hand. More stupid muscle memory: getting use to putting the pen down and being in that part of the screen, rather than the motion of mousing your mouse to the area you want to go. All ridiculous when you write it down, but shut up, you try it and you’ll see what I mean.

In terms of ACTUAL challenges besides the sensitivity being too sensitive at times, I found that OS X (and I’m sure every other operating system) isn’t really conducive to a tablet. The clicking areas are very tiny and the dock is on the edge of the screen which kind of sucks. I navigate a lot of OS X with the keyboard as well — command-spacebar to Spotlight to apps to launch, for example. I’ve always been kinda 50/50 on switching apps, doing it the hard way (click in the dock), but actually using the keyboard shortcut has become vital with the Wacom. It’s a pain to go click in the dock. Command-tab brings up the app switching thingy so you can tab over to the app you want to jump to. It’s so much faster and less annoying.

But being in the Finder itself is kinda crappy. Bringing in files via the Media Browser in Premiere is definitely the way to go most of the time anyway, but especially with the tablet. Big chunky squares begging to be clicked.

So alright, I guess I’m committing to the thing, I should figure out what these function buttons and stuff actually do, right? I’ve remapped the everloving hell out of my keyboard settings in all my NLEs to make myself more efficient, so mo’ buttons mo’ problems.

I found a video by Wacom about editing in Premiere. Unfortunately, it seems to have been designed by someone who has never actually been an editor in their entire lives. Yo, Wacom, look at all these psychopaths that literally PREACH THE RELIGION of the pen. Why don’t you ask one of them to make you a video that editors can learn stuff from?

So I turned to Twitter to see what the hivemind likes. There’s actually very little consensus about how to use the various buttons. Everybody is different. Paul Conigliaro (@conigs) had a very helpful and cute little gif instructing me in my grip to switch between pen and keyboard rapidly.

And a lot of people had other things to say.

A thing I learned about the Intuos4 was that it introduced Precision Mode, which seems to have solved my issues with moving around things with frame accuracy. Grab something, hit precision mode, drag, let go, hit precision mode. It’s a little bit to get used to, but in some ways gets even more precise than the mouse. I can imagine that drawing masks with the thing gets straight up cray. I actually WANT to mask something and try it out. Eh. Kind of.

Additionally, I got a few tips from Dan Wolfmeyer who is in Media Composer on the Intuos 3.

But then I wonder if coming to rely on a tablet setup is wise. What if you end up in an edit room without a mouse, on a freelance gig or something? Will you adapt so closely to a pen that mousing will send you back to the stone ages in terms of efficiency? Will using a mouse after all this tablet Wacom pen junk turn your hand into a CLAW?

Kidding aside, I think this is a valid concern for people. Especially those who aren’t particularly adaptable by nature. Is it possible to be tied too closely to a specified way of pointing around?

(I’ve been told that freelancers take their tablets with them from job to job with no issue, so there you go. I guess if you’re in a corporate environment where they don’t like new things or don’t want you to change edit rooms, that might be a minor issue, but for the most part it’s not a thing.)

Obviously I’m not too worried about it.

Anyway, here’s where my tablet settings have ended up after a week of usage. I actually have double click and precision mode on the pen itself. I’m too used to control-clicking to right click anyway, so there’s no point in trying to retrain some serious muscle memory when my left hand is on the keyboard anyway. On the tablet itself, somewhat untouched button arrangement. The wheel is mapped to J and L, and also left arrow and right arrow and zoom. I did end up with snap, hand tool, application switching, and right click. All of those things are done by my left hand on the regular, but I figured if I’m in an instance where I’m using the wheel heavily, it might not be terrible to not have to return to the keyboard for something. I’m not sure I ever will though. I’m like a trained monkey on the keyboard.

And of course, if anyone has any suggestions or advice about this matter, please throw it in while my mind is still impressionable. There’s a small window where I can train myself, know what I mean? So here’s what I learned so far:

1. My hand doesn’t hurt. It didn’t really before, but it doesn’t now either.
2. I am capable of learning new ways to point and click.
3. I’m going to lose the pen a lot.

I can’t say it makes me any faster, but it doesn’t seem to be slowing me down and it makes me LOOK a lot cooler, which we all know I desperately need.

(Only partially related note I accidentally found while Googling something else: Wacom is a Japanese portmanteau: Wa for “harmony” or “circle”, and Komu for “computer”. THAT’S SO CUTE.)