The shoot for the project I blogged (and have been tweeting) about wrapped last night, so I thought I’d do a short post-mortem about the experience while it was still fresh on my mind.

Background on the film: It was written by Kate Chaplin, directed by Tom Johnson and Nate Savidge, produced by Karmic Courage and Inverted Staircase Productions. The crew and cast were entirely local, volunteer basis only. The superquick synopsis – A short film about how Star Wars can ruin your life.

A teaser “poster” someone made.

The shoot took place over 6 days, and I was present for 4 of those days, plus the day before shooting started for a crew meeting. Between that and my regular job, it’s been a long week. I served the crew as a Production Assistant, which meant a lot of scurrying around for short periods of time, a lot of waiting, and a lot of lugging stuff around and wrangling people.

I am an editor, and that’s always where I gravitate, feel most comfortable, and ultimately want to end up. At my current day job, I do a lot of all the other stuff, as most people around here do, including lots of shooting. There is, however, a huge difference between a small interview shoot, and a narrative fiction piece with a crew and cast of 20. Production has never been my favorite step of filmmaking. It was always just a hoop to jump through in order to have material to edit. But I really do enjoy being a part of it sometimes, getting out of my comfort zone, and learning new things on the set. It’s an entirely different energy, and you get to know people a lot more.

The shoots that were outside were ungodly hot. The inside shoots were cramped and also ungodly hot as the AC had to be killed for sound. Our final day of shooting was inside a movie theater, so that stayed cool since the theater had to remain operating, luckily. I ended up having to be an extra in the very last setup. It was amusing to be on the other side of the camera for that last stretch, but hopefully we’re out of focus because my hair was not cool. 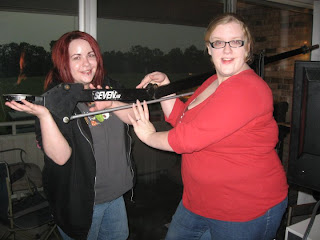 Katie & I loving on the jib.

I learned quite a lot about production, and about myself during the last week. I had a chance to set back and consider the hard work people put in to filming movies. I considered my own career choices, solidified once again by my experiences. I thought about if I would ever want to serve in a larger capacity in a production like this, and how my set would operate differently. I think I would be a good director, by the way. Maybe somewhere far down the line after I accomplish some other priorities. 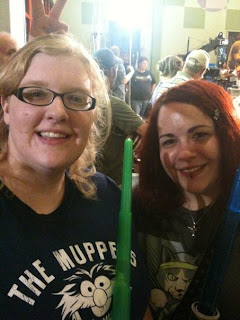 Nearly midnight on the final shoot day, we’re in front of the camera as extras, plus we got light sabers.

All in all, I’m really glad I had the opportunity to finally help out with a Karmic Courage film. Even though as a production assistant, I had no creative input in the film itself, I still was part of the production, and every piece is important to making these things run. I’m happy to be a part of filmmaking in Indiana and to get to know other people on the crew better. 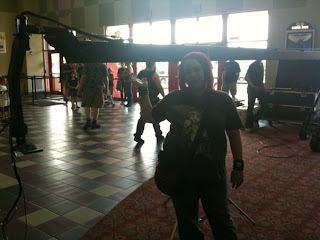 Katie showing off the giant crane set up in a movie theater lobby.

Next time you go to a movie, think about the people that have to set up those scenes, or cater to the stars’ needs, or clean up the trash left behind. That’s a lot of crazy hard work that you’ll never really appreciate! 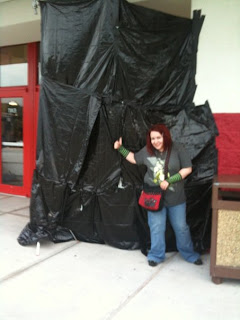 The giant contraption we made out of light stands and trash bags to block ambient light.