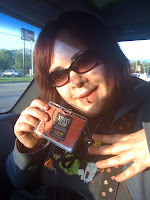 Last summer, I had the opportunity to be a video production intern for NUVO Newsweekly. It was a great internship that left me and my intern partner (Katie Toomey) somewhat perplexed as to what to do occasionally, but it taught us improvisation in the field, how to deal with issues like shooting in a dark, loud bar filled with drunk people, and quite a few other interesting things. It also gave us the opportunity to go to some events that we’d never been to around Indy to cover them.

Funnily enough, this story from that video internship comes from the one event we covered without video. We were part of the promotions staff as well, which was responsible for having a NUVO presence at events, and they asked us to watch over the table and interact with people at the Indy Wine Fest. We basically were to wear our NUVO shirts, sit at a table with all kinds of NUVO stuff and Indy event information, talk about the latest issue and upcoming events, and just be pleasant. And oh yea, go wander about and try some of the wines. But this story isn’t a ridiculous situation in drunkenness – we’re more professional than that. 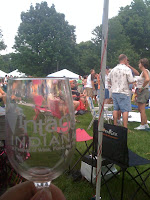 One thing we frequently had to do as promotions interns was drive the NUVO jeep to and from events. We were told it would be in a parking lot space, so we were very surprised to see it INSIDE the fenced off Military Park sitting next to the NUVO tent. The first shift NUVO interns told us our instructions when the event was over. We were to disassemble the tent, pack it all up in the NUVO jeep, and drive back to the office and drop it all off. We sat under the NUVO tent all afternoon, interacting with extremely drunk people, taking some still photos of the event for nuvo.net, and enjoying a sample or two of wine. We also spent much of the day contemplating how 1) the jeep got in the middle of Military Park and 2) HOW we were to get it OUT. 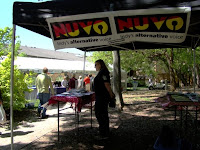 The event ended and we packed up the table and promotional items. The previous interns assured us that the tent was self-explanatory to take down, so we went to work. 45 minutes later, we were still struggling to figure out where to start with the thing. I got on my iPhone and googled the manufacturer and found a YouTube instructional video on how to do it. However, it was the worst instructional video I had ever seen, and it was for a slightly different model. Finally, we decided to see what would happen if we knocked the tent on its side – perhaps it folded up upside down? So we counted to three, and heaved the thing on its side. That’s when suddenly, 3 burly guys came running, yelling at us, and proceeded to take 5 seconds to fold it up for us and tell us how to do it. And no, it WAS NOT self-explanatory. Not even remotely. We’re not idiots, at least not most of the time.

So we got the tent folded up, and Katie told me *I* was driving the jeep. Neither of us were used to driving a vehicle as big as a rickety old full size jeep, but I used to drive a small truck back in the day, and Katie drives a cavalier, so I got to do it. Lovely! There were still quite a few drunk people laying in the grass passed out, so I was concerned I would end up committing manslaughter in a company vehicle. We noticed a couple of other vehicles that seemed to be coming and going loading stuff up from the southwest corner of the park, so we decided to head that way. We careful drove the big, squeaky, random-noise-making, old jeep (which is painted in rainbow colors) across Military Park, between drunk people, a stage, other tents, and people working. And the jeep had a problem constantly pulling to the left. Oh, and in case you’re wondering, Military Park is incredibly bumpy.

Incredibly, we made it to a muddy vehicle exit, probably spinning mud on people as we made our escape, and drove over the curb onto the one way street and were free.

I did not expect to be driving a rainbow colored jeep around in the middle of a park in downtown Indianapolis during a video internship, but it was surely memorable. And I have to say, driving around downtown in the NUVO jeep with all the windows down (no air conditioning) just before twilight on a warm June evening, waving at excited NUVO readers, was quite fun. Editors don’t “get out” much outside their little warm box of an edit suite, so it was nice to take an internship to got us out there, solving strange problems and interacting with crowds. 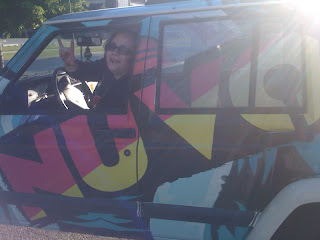